You are not connected. Please login or register
Ok APU,Time too send in your pics for the next POTM contest... Please email me at metal.maniac@live.com or please PM myself ...Depending on how many pics we get and the variety of species we will have several categories...Only 1 pic per member per species so you can send in 1 fish 1 cat 1 lizard just not 2 fish 2 cat...you get the idea!!...So send em in and lets make this a BIG ONE!!!... Cheers!!!...Metal Maniac and the APU Staff
APU is on Aquarium Directory- AquariumLinks.net!!!...check it out!!!
Please Vote For Us On AquaRank!!!

JERUSALEM (AFP) - Israeli researchers announced that they had discovered several new terrestrial and aquatic species in a cave in the centre of the country, including a blind scorpion.

"This a first-grade discovery for science," he added in front of a glass jars containing the new discoveries.

The largest of the animals was around five centimetres (two inches) and resembled a white scorpion. The rest could only be seen with the aid of microscopes.

All were discovered in a cave in the Rale region, close to Tel Aviv, during research into the ecosystems of aquifers.

"The fact that these species have been apparently living for millions of years in the caves without ever having been discovered is very rare," said Hanan Dimentman of the university's department of ecology.

"Their whole way of life is totally new to us, it's like a new world underground."

The discoveries have yet to be given a name but Dimentman said they could be divided into categories of scorpions and bacteria.

"The blind scorpions that we discovered are predators and are distant cousins of other scorpions which have never been found before in the Middle East," he added.

Species of blind scorpions are known to live in South America but it is the first time they have been discovered in the Middle East region. 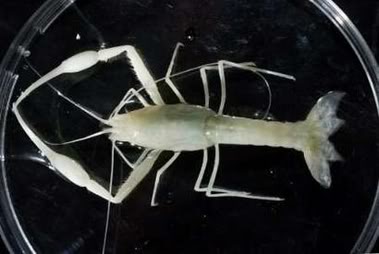 » "like mother, like dougher," mmm??? you deside.
» Is there a "seed packet calculator/translator" anywhere?
» Has anyone grown "Tess's Land Race" or other currant tomatoes?
» A few ideas from "Living on a Dime"
» "Haunting in the Hills" Storytelling Festival
Current date/time is Mon 27 Jan 2020, 19:27