You are not connected. Please login or register
Ok APU,Time too send in your pics for the next POTM contest... Please email me at metal.maniac@live.com or please PM myself ...Depending on how many pics we get and the variety of species we will have several categories...Only 1 pic per member per species so you can send in 1 fish 1 cat 1 lizard just not 2 fish 2 cat...you get the idea!!...So send em in and lets make this a BIG ONE!!!... Cheers!!!...Metal Maniac and the APU Staff
APU is on Aquarium Directory- AquariumLinks.net!!!...check it out!!!
Please Vote For Us On AquaRank!!!

A rare species of deep-sea crab, normally found at depths of up to three kilometres, has been hauled up in the nets of a Cornish fisherman.

The Giant Box Crab was caught 75 miles west of Padstow at a depth of 50 fathoms (100 metres) by skipper John Walsh on his boat "Charisma".

Believed to be Britain's largest crab species, the giant box crab can reach lengths of up to two metres.

It's only the seventh recorded specimen since records began in 1900 and one of the only ones to have survived the huge changes in pressure as it was hauled to the surface.

Despite its long journey from the depths and the fact it was kept alive on te boat for three days before arriving back at Padstow, the crab, which has a claw span of 120cm, appears in good health and is recovering in a specially chilled tank at Blue Reef.

Aquarist Matt Slater said "It looks like something from another planet and has caused quite a stir among all the staff here.

"It's one of the oddest crabs I've ever seen. It has weird eyes on stalks which look like bicycle handlebard and a strange pair of backwards facing pincers."

The crab has now been formally identified with the help of well-known local zoologist, Dr Paul Gainey.

"Apparently it is normally found very deep on the edge of the continental shelf which runs from Morocco to Ireland at depths of 3,000 metres," explained Matt. 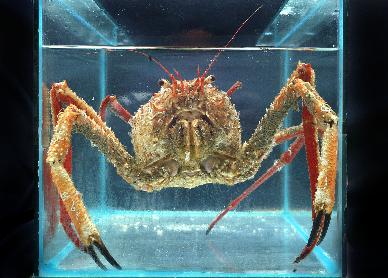